Cologne is famous for the Cologne Cathedral - and it is our hometown.

The traces of 2.000 years of history lead you through a picturesque old town with the famous Cologne Cathedral and the Love Bridge, which connects the magnificent promenades to both banks of the Rhine. Discover with us nice buildings and hidden places, interesting museums, green spots to chill out - and the incomparable Cologne way of life in the fourth largest city in Germany.

From the Cologne-Bonn Airport you can take the S-Bahn line 19. In 15 minutes, you will get to Cologne Central Station, which is located in the middle of the old town. You will find the tourist information in front of the cathedral.

In these two videos you will find more information about the airport and the main train station:

We recommend the Hotel NH Köln Altstadt*. This modern 4-star hotel is located in the southern part of the old town at the Rheinauhafen. The tram stops 450 metres away. A 20-minute walk along the Rhine promenade takes you to Cologne Cathedral. If you would like to treat yourself to a little more luxury and reside directly in the city centre, we recommend the Hotel Dorint am Heumarkt*.

The Cologne Cathedral is a UNESCO World Heritage Site and the city's landmark. With its double-tower façade, it is the second highest church in Germany and the third highest in the world. The highlights are the detailed stained glass windows and the shrine with the bones of the Three Kings. Those of you who climb to the top of the tower are rewarded with a fantastic view.

Next to the cathedral there are two interesting museums. The Museum Ludwig presents art from the 20th century to the present, including the largest Pop Art collection in Europe and the world's third largest collection of works of Pablo Picasso. In the Roman-Germanic Museum you can admire exhibits from over 100,000 years. Highlights include magnificent goldsmith work and the world's largest collection of Roman glass vessels from the 1st to 4th centuries.

Near these museums are two of the oldest breweries in Cologne, Brauhaus Sion (1318) and Früh am Dom (1904). Here you can get to know the traditional Cologne brewery culture (drinking and celebrating together) in a rustic ambience, try a freshly tapped 'Kölsch' and authentic food. But watch out: As long as the beer mat does not cover your emptied glass, you will quickly get another glass of Kölsch. The Heinzelmännchen fountain in front of the brewery house FRÜH is definitely worth a visit. The Heinzelmännchen were, according to the legend, the ghosts of Cologne. When the citizens slept, they did the work at night. At some point they disappeared because they were observed.

The Zeughaus with its striking red and white shutters once served as an arsenal. Today it houses the Cologne City Museum with exhibits on Cologne life from the Middle Ages onwards.

The historical House 4711 (1792) in the Glockengasse takes visitors on a journey into the world of scents and entices them with a fountain of scents "Echt Kölnisch Wasser" (Genuine Eau de Cologne), a museum and hourly chimes.

One of the most important ethnological museums in Germany is the Rautenstrauch-Joest-Museum. The interactive exhibition deals with the customs of world cultures. You should plan a little more time for your multimedia journey of discovery.

An ice cream cone, a three-ton sculpture by the Pop Art artist Claes Oldenburg, is enthroned on the roof of the Neumarkt-Galerie . The shopping street Schildergasse leads you to Gürzenich. Cologne's "Gute Stube" has been cultivating its festival house tradition since 1447, nowadays in the ambience of the 50s.

The historical town hall from the 12th century is the oldest town hall in Germany. Its tower is decorated with 130 sculptures of patron saints and honorary citizens. Under the tower clock, the Platz-Jabbeck, a wooden mask with a floppy hat, looks down on the Alter Markt and disrespectfully sticks out its tongue every hour on the hour. Just opposite, between the cafés and pubs, an archway leads you to the Cologne cult figures Tünnes und Schäl. The rubbing of Tünnes' polished nose is said to bring good luck.

The winding alleys and the colourful stacking houses at the Fischmarkt characterise together with St Martin's Church the skyline of the old town.

Well known among jazz lovers are Papa Joe's jazz clubs. For over 40 years, jazz bands have been playing in the Klimperkasten at Alter Markt, changing daily, and admission is always free. An essential part of the Cologne way of life is its dialect, de Kölsche Sproch, which you will encounter in the names of pubs and traditional here.

The Hohenzollern Bridge, also called the love bridge, carries over a million love locks. The keys are traditionally thrown into the Rhine. At the end of the bridge you take a selfie with the Cologne Cathedral. The hotspot for a 360° panoramic view, which in clear weather extends as far as the Siebengebirge, is the viewing terrace of the KölnTriangleand you can get up there comfortably by elevator.

At the Rheinauhafen (harbour) is the Cologne Chocolate Museum, which entices visitors with a bubbling chocolate fountain and tastings as part of an exciting guided tour. The famous crane housesare also nearby. Great photo motif, but the apartments are far expensive for normal earners to live in ;)

The Severinstorburg at Chlodwigplatz and the Hahnentor at Rudolfplatz are among the five remaining of the former twelve gate castles of the medieval city fortifications. The Cologne Carnival traditionally starts at Severinstorburg with the Rosenmontag procession. Countless beautiful cafés, cosy pubs and speciality restaurants from all over the world have settled around both squares. Bagatelle in Südstadt serves French appetizers in tapas style. On Rudolfplatz in the Belgian Quarter you can get the best burgers at Marx & Engels and at Salon Schmitz the most delicious ice cream in Cologne.

From here it is a 15-minutes walk (tram 1 or 7) to the Melaten cemeterythe more than 200-year-old central cemetery with around 55,000 graves. On the „Millionenallee“ you will find the most monumental and expensive gravesites of prominent Cologne citizens.

The Cologne Zoo (Tram 16 or 18) is the third oldest zoo in Germany and certainly one of the most beautiful. Do not miss any of the numerous feedings! Watch this video to see all highlights in the zoo:

Nearby, there are two highlights free of charge: In the Flora and Botanical Garden you will find plants from all climate zones of the world, from the English Landscape Garden to tropical and desert houses. Also nearby is the sculpture park with contemporary works of national and international artists. Afterwards, you can take the Rhine cable car to the other side of the river to the Rheinpark .

Seasonal highlights include the Cologne Carnival, which officially starts its session on 11 November at "Elf Uhr Elf", and the atmospheric Christmas markets, where you can buy handicrafts and delicacies in the festively decorated city. The daily events range from small musical events to big concerts, from comedy shows to theatre and musicals, from art house cinema to the latest Hollywood movies. Bars and clubs in the hip districts attract night owls. In the Latin Quarter of the students there is a lot going on around Zülpicher Straße every evening until late at night. Cheap cocktails to good music are available at the Soul Bar. The bar Ona Mor is chic and the drinks here are of the very best.

Cologne is also one of the most LGBT-friendly cities in Europe. Around the Heumarkt and Rudolfplatz (Schaafenstraße) you will find many gay barswhere gays, lesbians, transsexuals and their friends are welcome. At the beginning of July the biggest CSD parade of all Germany takes place in Cologne. One million people come every year to demonstrate and celebrate diversity.

How can you discover Cologne in only 48 hours? We have summarized for you in this video:

You can explore the old town on foot. On the Rhine promenades and most of the streets the bicycle is a fast alternative. In the next video, we show you the best bike tour in Cologne.

If you want to use public transport : For the entire Cologne city area (including the airport) the price level 1b is correct. The 24-hour ticket is worthwhile from the 3rd journey onwards. Two people save even more with the 24-hour ticket for a maximum of five people. You get a discount on online and mobile phone tickets. You can find more information here.

Car drivers can find information about P+R facilities and multi-storey car parks on the interactive map of the city of Cologne.

With a rental car you can explore even more beautiful places. Bonn and Düsseldorf are only about 40 minutes away. Book your car now via the following link:

RENTAL CAR BOOKING *
"Da simmer dabei, dat is prima. Viva Colonia! We love life, love and lust. We believe in the good Lord and we're still thirsty!" That's a typical Cologne song. The city is multicultural, crazy and always in a good mood. We love to live here! 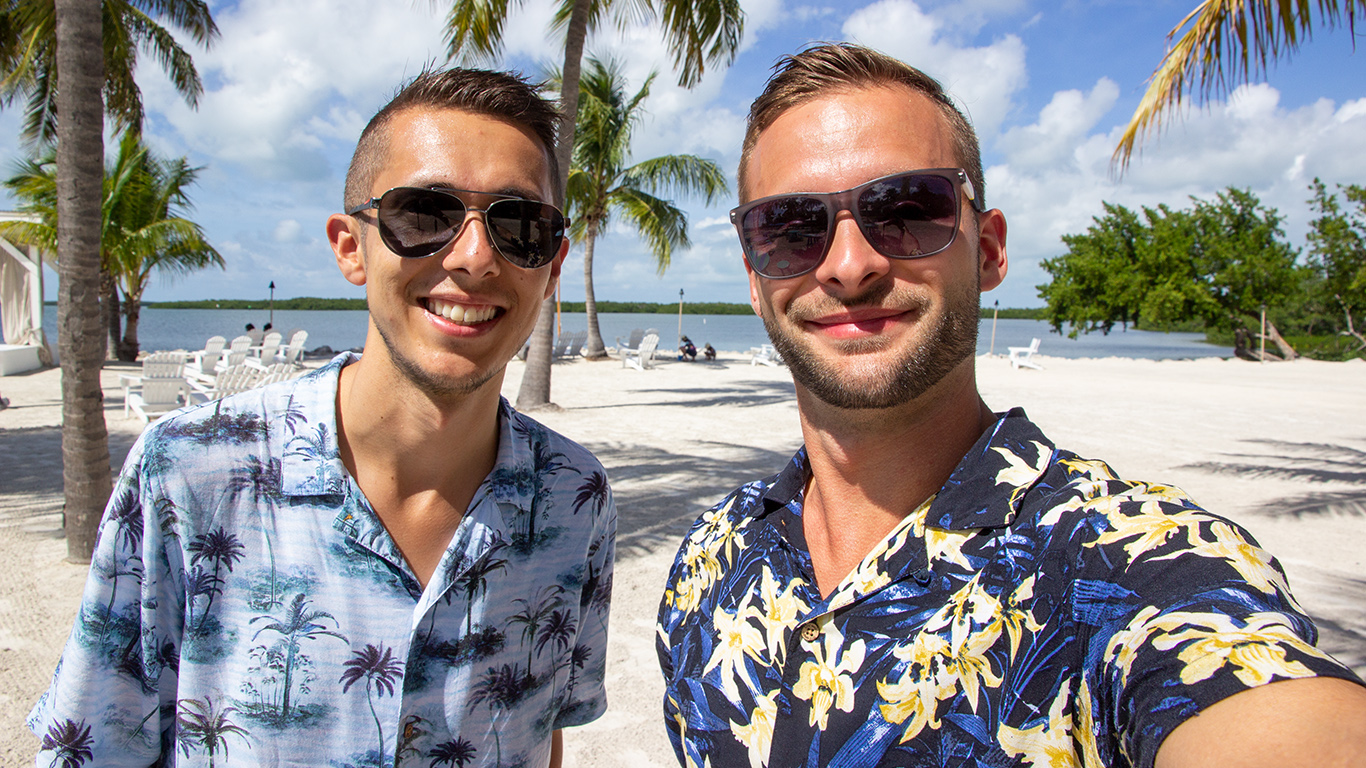 New articles in the travel blog 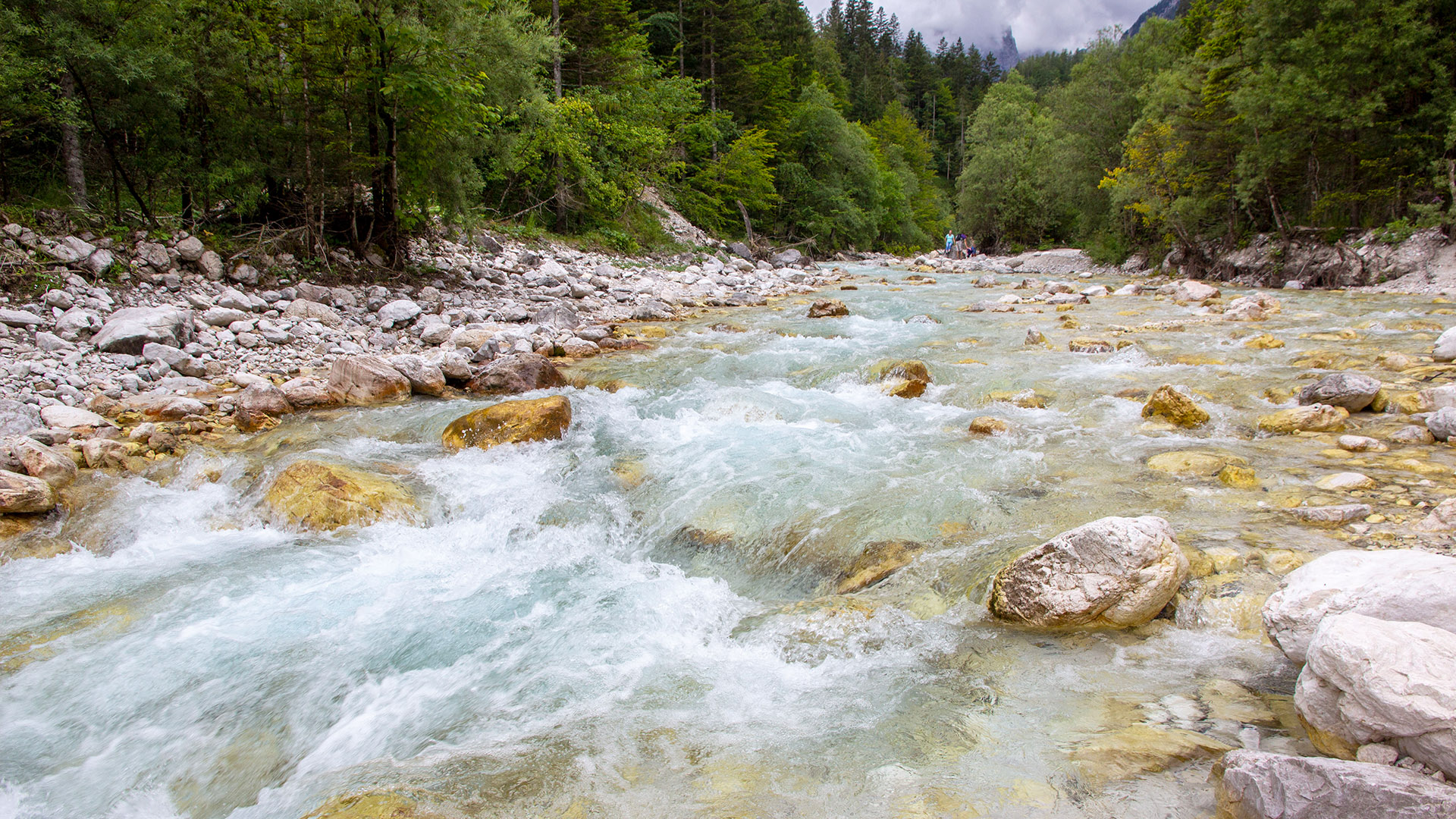 Europe Slovenia
Slovenia – the only country with “love” in its name. The trendy capital Ljubljana, the Mediterranean feeling in Koper, the traditional wine cellars in Maribor, and beautiful natural landscapes like the Triglav National Park make your trip to Slovenia perfect. The small country with only two million inhabitants is more diverse than you think! 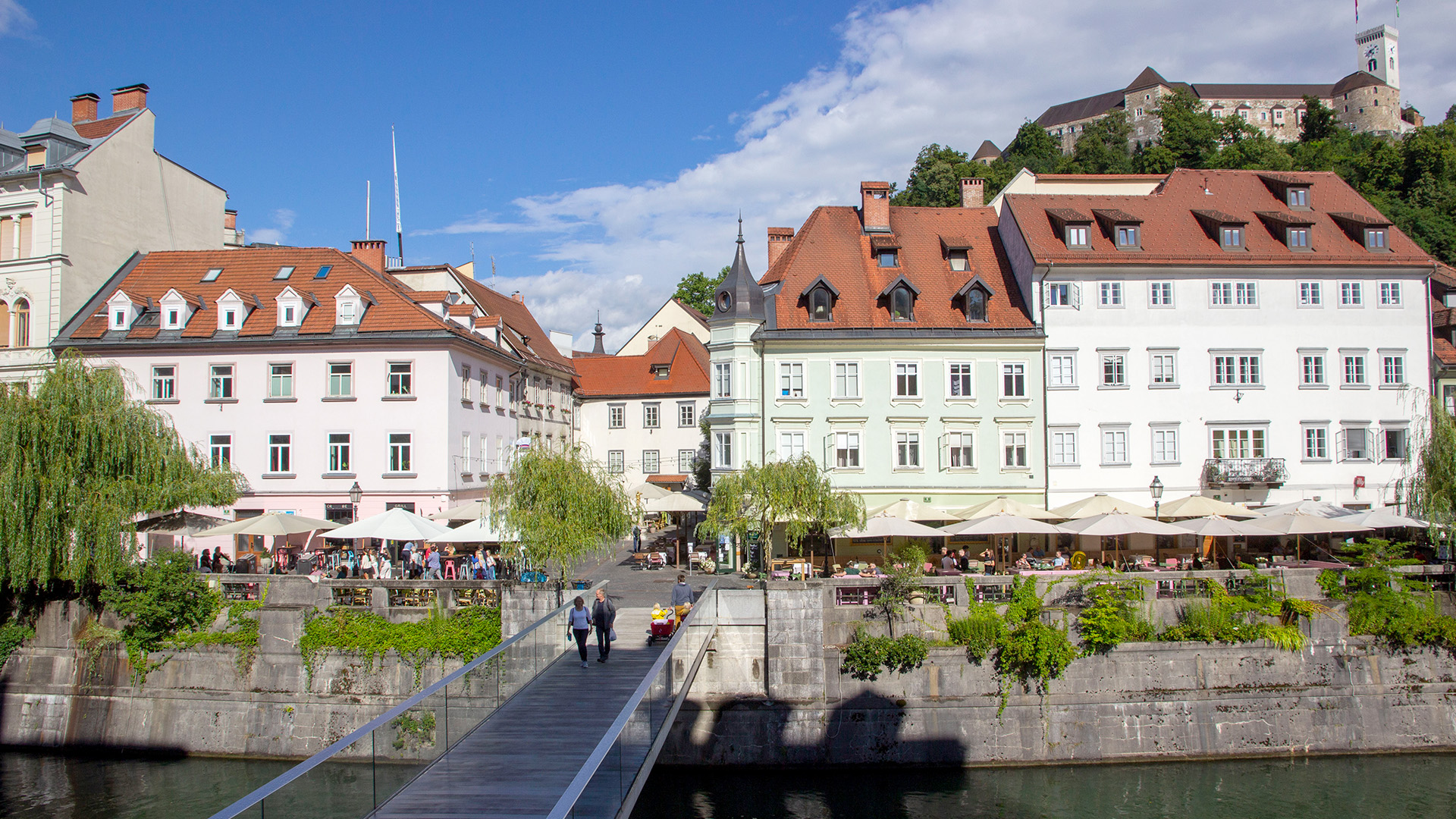 Europe Slovenia
Ljubljana is one of the secret top destinations in Europe. Ljubljana is the green capital of Slovenia. Beautiful parks, a historic cityscape and youthful energy - we take you on a journey through the... 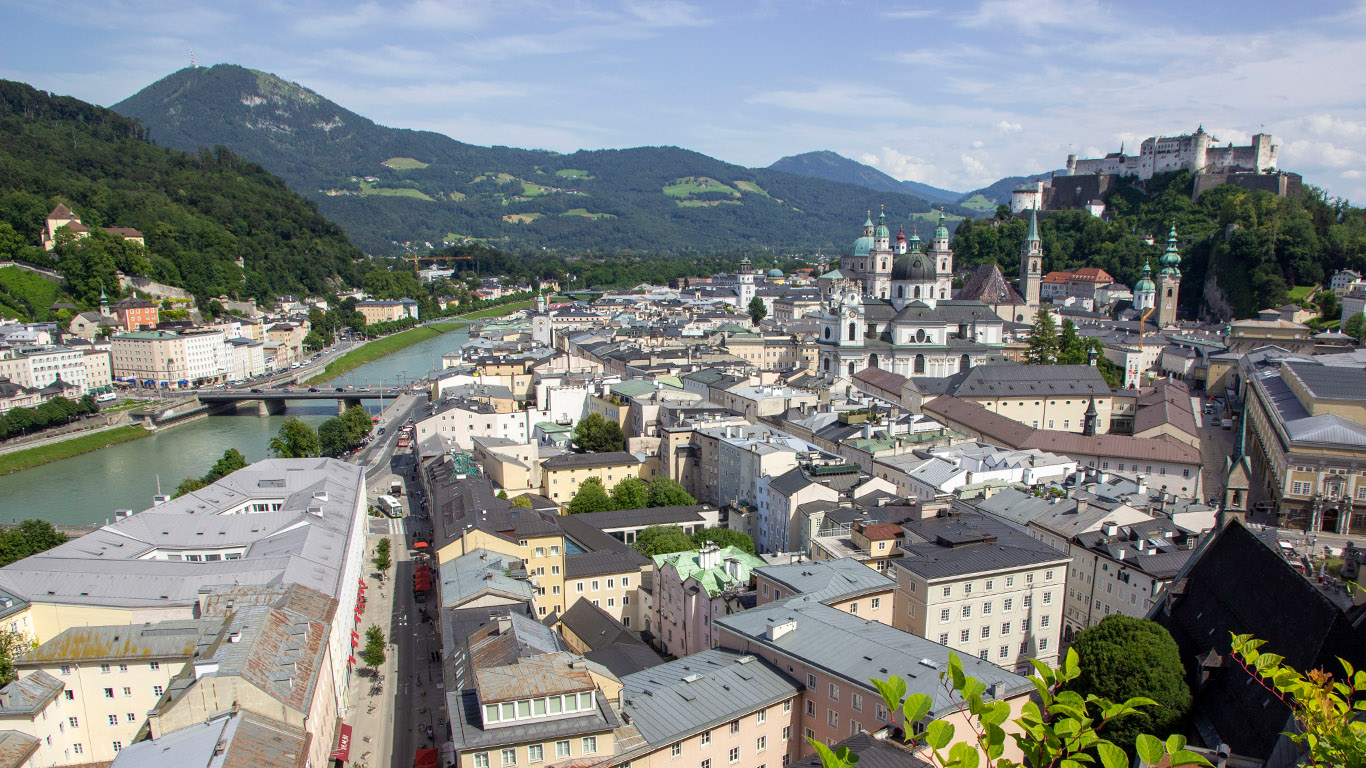 Europe Austria
Is Salzburg really the 'little sister' of Vienna? That is what makes the city so worth seeing: art, culture and many great sights. Salzburg is one of the most beautiful baroque cities in Europe. The birthplace...

The links marked with * are affiliate links. If a transaction is made via one of these links, theTravellers will get a commission. There are no additional costs for you. Where, when and how you buy a product or book your trip is of course up to you. 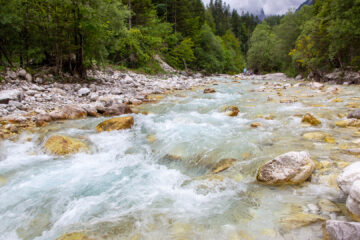 Slovenia – the only country with “love” in its name. The trendy capital Ljubljana, the Mediterranean feeling in Koper, the traditional wine cellars in Maribor, and beautiful natural landscapes like the Triglav National Park make your trip to Slovenia perfect. The small country with only two million inhabitants is more diverse than you think! 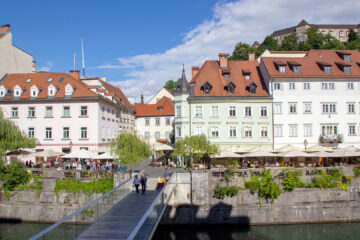 Ljubljana is one of the secret top destinations in Europe. Ljubljana is the green capital of Slovenia. Beautiful parks, a historic cityscape and youthful energy - we take you on a short trip. 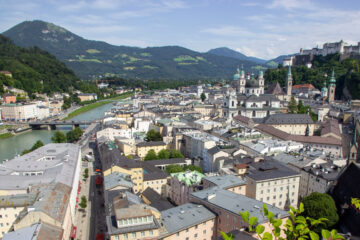 Is Salzburg really the little sister of Vienna? That is what makes the city so worth seeing: art, culture and many great sights. Salzburg is one of the most beautiful baroque cities in Europe. The birthplace of Mozart, the city's narrow alleys and wide squares in the old town are fascinating. Besides the world-famous Salzburg Festival, the city offers interesting and exciting events for your trip at any time of the year.